Small Press Reviews is moving! Click here to visit our new site.
Posted by M at 9:42 PM No comments:

Do I Dare Disturb the Universe? 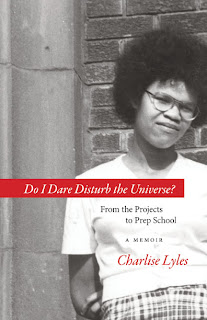 The first glimpse we get of Charlise Lyles in her recently updated memoir, Do I Dare Disturb the Universe?: From the Projects to Prep School and Beyond, is that of a young woman trying to find her place in the world. She lives in a housing project in a poverty-stricken section of Cleveland, her father is largely absent from her life, and the memory of the Cuyahoga river catching fire is still relatively fresh in her memory. At the same time, however, the young Lyles is filled with hope and ambition; she has a loving, driven, practical-minded mother who will do anything to see her daughter succeed, she has teachers who recognize her potential, and, perhaps most importantly (as far as the narrative is concerned), Lyles has just earned a scholarship through a program called A Better Chance, which means that she will be attending a largely white high school in Cleveland's suburbs starting the following Fall. Given the tension between the forces of hope and despair operating in Lyles' life, it's no wonder that her memoir amounts to a complex and compelling meditation on class, race, gender, and education.

Take, for example, Lyles' complicated relationship with her father, Charles. Though absent for the most part from his daughter's life, Charles is, nonetheless, a presence, a ghost who haunts his daughter's every step. In his only sustained appearance in the memoir, Charles comes off as a man who yearns to be an intellectual and who, given vastly different circumstances, might have made something of his life. He reads voraciously and is, in his own fashion, an expert in history and astronomy. Yet poverty and alcoholism have weighed Charles down, so even as he inspires his daughter to pursue the intellectual interests he can only dream of following, it's impossible to miss the fact that the man has no prospects. Subsequently, his complete disappearance from his daughter's life serves as a catalyst: Charlise must pick up where Charles has fallen short, must become the intellectual that her father always dreamed of being.

Overall, Do I Dare Disturb the Universe?, is an insightful and enjoyable book. Moving dramatically from a life filled with Black militants and violent, rat-infested housing projects to the more idyllic yet no less challenging setting of her suburban high school, Lyles paints a detailed, thoughtful picture of race relations in the 1970s and, in so doing, demands that we continue to examine these same important issues as we move into the future. Highly recommended.
Posted by M at 9:59 AM No comments: 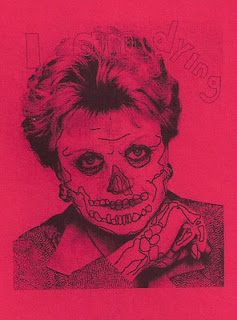 Though the title may just about say it all, there's a little more to J.A. Tyler's 2008 chapbook than just the fact that everyone is dying (or will die, or is thinking about it). It's the way they're all dying that makes this collection of flash fiction interesting: violently in most cases, angrily in others, and almost always with a splash of helpless existential angst. The cover, then -- a gruesomely embellished image of Angela Lansbury from her days as the star of Murder She Wrote -- is certainly appropriate, for there's a sense of mystery in Tyler's writing. The issue, however, isn't so much whodunnit as was the case on the TV show, because that much is obvious: life dunnit. The big question is how the characters in Tyler's vignettes got to where they are. The last moments, the reflection on last moments, the foreshadowings of last moments all serve as snapshots of the lives they represent and, as such, underscore the fragile nature of humanity. We are flesh and blood, this collection reminds us -- fragile, corruptible, and ultimately searching for something we're not likely to find.
Posted by M at 9:05 PM No comments: 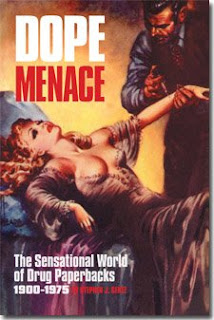 As faithful readers of my blog may have noticed, I've begun to promote my forthcoming novel, The Singular Exploits of Wonder Mom and Party Girl (PS Books, May 2009), somewhat shamelessly over the past few weeks. In some ways, the novel is a literary homage to "anti-dope" paperback novels of the last century -- so I was very excited to find Stephen J Gertz's Dope Menace: The Sensational World of Drug Paperbacks (Feral House, 2008), a nonfiction tome on that very subject, upon a recent visit to Doylestown Bookshop.

In Dope Menace, Gertz chronicles many of the social, legal, economic, and moral(istic) trends that helped to popularize and then undermine the market for drug paperbacks throughout the first three quarters of the twentieth century. From the earliest anti-drug tomes with titles like Plain Facts for Young Women on Marijuana, Narcotics, Liquor and Tobacco to latter-day tales of psychedelic excess like Beatnik Wanton (blurb: "She lusted in sin orgies and reefer brawls."), Dope Menace provides not only an insightful examination of the ways in which popular literature reflected changing attitudes toward sex and drugs over the course of the twentieth century, but also what might prove to be a postmortem of the publishing industry itself. Yet as interesting as Gertz's investigation of these phenomena may be, nothing speaks to the issues he discusses more clearly and colorfully than than the books themselves: dozens and dozens of book covers are reproduced in full color throughout the book along with wonderfully telling passages. Among my favorite titles: The Town That Took a Trip, Campus Sin Cult, and If the Coffin Fits.

The Brightest Moon of the Century

This review has been moved. Click here to read the review in its new context. 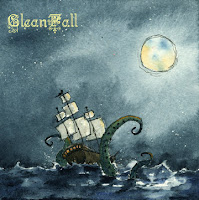 Although this space is usually reserved for books by independent publishers, I've just found a great new CD from an independent label and figured a little rule-bending never hurt anyone. It's called Idle Talk and the band is called Cleanfall. The tracks are upbeat and poppy in an indie kind of way. I'm almost tempted to say it's Guster meets Weezer, but there's more to the band than catchy hooks and plaintive vocals. Actually, what really does it for me is the band's lyrical sensibility. But how could it not? I'm a sucker for anything related to Kurt Vonnegut, and their fifth track, "Timequake" -- a conscious reference to Vonnegut's last novel -- offers a hypnotic meditation on the exquisite loneliness inherent in the human condition. Likewise, my ego is grandiose and self-deluding enough to allow me to believe, if only for a fleeting moment, that the third track, "Audrey," is a clairvoyant reference to the protagonist in my forthcoming novel, The Singular Exploits of Wonder Mom and Party Girl. And did I mention the CD's cover art? Great stuff from local artist Drew Falchetta. Overall, highly recommended. If you're in the neighborhood, drop by Cathy's Books in Havertown to pick up a copy. 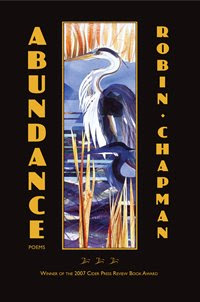 Robin Chapman's latest collection of poetry, Abundance, is the winner of the 2007 Cider Press Review Book Award for good reason: Chapman's gift for seeing the human dimension of the natural world drips lushly from every page. Throughout the collection, Chapman's poetry insists that the wonders of the natural world not only demand that we view the world through new eyes on a daily basis, but it also allows her readers to recognize the striking similarity between ourselves and the world that surrounds us. This is especially the case in "The Evolution of Sleep" in which the poet traces the all-so human enjoyment of spooning with a loved one in bed to the primitive instinct that drives alligators to seek each other's company for warmth. Yet Chapman is careful never to slip too far into a romanticized vision of nature; indeed, in "What the Eye Supplies," she endeavors with great care to interrogate the relationship between nature as it is and nature as we interpret it. In many ways, this is the tension that runs throughout Abundance. That is, by exploring the relationship between humanity and nature, Chapman gives us perspective enough to recognize that what we see is not necessarily what is, and that in the big picture, we are ourselves as animal as we are human.
Posted by M at 4:57 PM No comments: