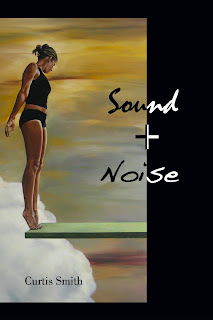 As a rule, I don't read books on my computer screen. The strain on my eyes gives me a headache, and there’s something about holding a bound volume in my hand that’s simply too intoxicating to give up for the cold, lifeless experience of interfacing with a machine. I say all of this not so much to rail against technology but to underscore how much I enjoyed reading Curtis Smith’s new novel, Sound and Noise. My admiration for his storytelling skills (see, for example, his wonderful book of short stories, The Species Crown) was enough for me to bend my hard and fast rule against reading novels on my computer just once, just for him, but it was his gift for imagining characters and their settings that kept me coming back for more--blindness and aesthetics be damned!

The novel presents the parallel lives of two characters for whom heartbreak is no stranger. Tom is an artist who pines away for his comatose wife while life ostensibly passes him by. Jackie is a former backup singer in a classic rock band whose life has settled into a rut that consists largely of tending to the bar she inherited from her family and prowling the aisles of her local grocery store in search of the meaning of life. Or love. Whichever comes first. Bereft of joy, both characters struggle with loneliness and its various cousins—depression and despair, chief among them—only to find hope in each other and, perhaps more importantly, in the flaws that make them so human.

While the basic premise of Sound and Noise may sound a little gloomy, Smith is as adept at tackling weighty subjects with a light touch as he is at breathing life into his characters. Indeed, it’s the “extras” in the world that the protagonists inhabit that make their struggles not only bearable but ultimately so enjoyable. The small college town Smith envisions is teeming with well-meaning if not always reliable compatriots for Jackie, and despite ingesting mind-altering substances on the least opportune occasions, Tom’s friend Blaine, an otherwise down-to-Earth novelist approaching middle-age, gives the proceedings an atmosphere not unlike that of a classic buddy-film.

Granted, I’m a big fan of Curtis Smith, but I don’t think I’m exaggerating when I say that this is a wonderful work of fiction that will allow even cynics (such as myself) to find a deeper appreciation for the day-to-day miracles inherent in every life. Available soon from Casperian Books, Sound and Noise is a winner.